Jackson will be on team Blackmon Racing for the 2021 season! Blackmon Racing is a team owned and represented by Jackson. This will be for the first year for Jackson running his own program, however with the great companies and supporters behind him should make 2021 a great year!

Jackson is a up and coming road racer racing for team Blackmon Racing in the 2021 MotoAmerica Twins Cup season! Jackson, 19, is out of Rock Hill, SC and has been racing since he was 8 years old. 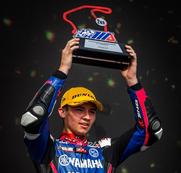 Jackson's past years in racing have been great and the future is looking even better. None of this would be possible without all Jackson's sponsors and supporters! They mean the world to us and we appreciate all of their help!